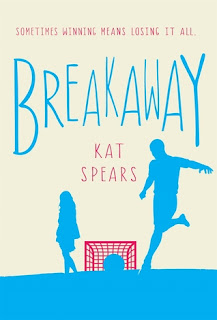 When Jason Marshall's younger sister passes away, he knows he can count on his three best friends and soccer teammates--Mario, Jordie, and Chick--to be there for him. With a grief-crippled mother and a father who's not in the picture, he needs them more than ever. But when Mario starts hanging out with a rough group of friends and Jordie finally lands the girl of his dreams, Jason is left to fend for himself while maintaining a strained relationship with troubled and quiet Chick. Then Jason meets Raine, a girl he thinks is out of his league but who sees him for everything he wants to be, and he finds himself pulled between building a healthy and stable relationship with a girl he might be falling in love with, grieving for his sister, and trying to hold onto the friendships he has always relied on.

A witty and emotionally moving tale of friendship, first love, and loss, Breakaway is Kat Spears at her finest.

I think I've been reading a few books with the main character dealing with loss, recently. , Jason was grieving over his younger sister. It wasn't easy with his grieving, mother and a father who wasn't really in the picture. Thankfully, Jason had his friends with him, Mario, Jordie and Chick. But their friendship soon went astray when Mario started to hang out with his new friends, and Jordie got himself a girlfriend. Then, Jason met Raine, a girl who was out of his league on a double date with Jordie. I think, the story reminds me to How to Be Brave by E. Katherine Kottaras.


If I have to judge the book by its cover, I wouldn't expect to read about dealing with loss, depression or drug addiction. But those are a few issues in Breakaway.

Spears did a great job with writing Breakaway in Jason's point of view. The stories started out nicely, and I do enjoy reading about Jason and his friends. It was sad to see how they started to go apart, especially when Jason was dealing with his loss. The romance between Jason and Raine was alright. There are a few dramas, and sweet moments. I guess the Breakaway by Kat Spears was an alright read if it wasn't for the ending. I'm a bit dissatisfied with how the story ended. It didn't really resolve a lot issues in the book. It was so sudden and lazy.

I received a copy of this book from the author/publisher/Netgalley in exchange for my review.