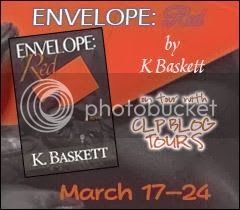 K. Baskett is now on tour with CLP Book Tours with Envelope: Red. Please visit the CLP Book Tours page for more blog stops. Don't forget to leave a comment on the tour page with your email address to win a print copy of the book (US Only). 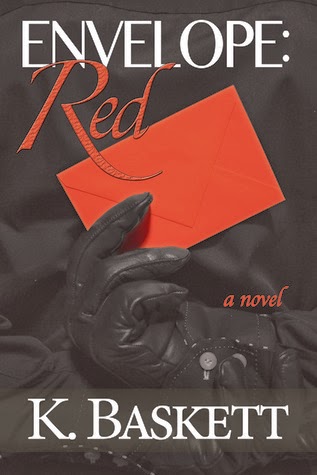 Unemployed with no prospects, Dorian Wells is a young man trying desperately to stay afloat and be a good father to his toddler son. While already struggling to pay the bills and earn proper visitation with his child, Dorian’s tumultuous life is thrown into further upheaval when his mother is suddenly hospitalized.

On the verge of losing everything, it seems Dorian finally has a stroke of luck when he inadvertently learns of a potential opportunity with Jakkaru, a decadent, cut-throat organization that pays handsomely by the body count. Dorian’s lifelong friend, Rafe Ibadiah, is his ticket into Jakkaru and soon Dorian is training to be a professional hitman. But learning how to properly kill for a living is not as easy as it seems, and he quickly discovers the short arms of theory are a far reach from reality as the harrowing journey makes him question everything he believes.

The final test before full acceptance into Jakkaru is a contract Dorian must complete alone. Delivered to him via a small red envelope, the name inside propels the stakes of this dangerous game higher than ever before. Dorian will sacrifice anything for his son, but it’s not until he is ordered to do the unthinkable that he grasps the horrific depth of his commitment.

Award-winning author, K. Baskett, expertly weaves a chilling tale of suspense in Envelope: Red that culminates in a shocking look at the prickly nuances of loyalty. Gritty and authentic, Dorian’s story is ultimately a poignant examination of the human condition - what lies within the heart of us all.

Envelope: Red started a bit slow with the introduction of Dorian and his life. Dorian was unemployed and had no prospect. But he’s trying really hard to be a good father to his son. I can’t say that I like Dorian what with his personality – he’s lazy and a bit selfish. But Dorian had to pull himself together when he lost his mother. It was then that he got the opportunity to be a part of Jakkuru, or jackal, a very dangerous organization.

K. Baskett was really good at building the story. I didn’t know what to expect when I started this book. I wasn’t fond of the main character. But after a while, I was hooked with the story and the Jakkaru’s world. I wanted to know what was going to happen to Dorian and what is it with the red envelope. The story became a bit predictable towards the end of it, but still, the ending left me with my mouth agape. If you’re a fan of crime, suspense and thriller, Envelope: Red is definitely a book for you.

1. Please introduce yourself and your book.
Envelope: Red is the new suspense/thriller from award-winning author, K. Baskett. Young and unemployed, Dorian Wells is striving to pay the bills and care for his toddler son when his mother is suddenly hospitalized. On the verge of losing everything, he inadvertently learns of Jakkaru, a vicious and murderous organization that pays its associates well. Dorian’s lifelong friend, Rafe Ibadiah, is his ticket into Jakkaru and soon he is training to be a professional hitman. But killing people for a living is not as easy as it seems, and Dorian soon discovers the short arms of theory are a far reach from reality as the harrowing journey makes Dorian question everything he believes. The final test before full acceptance into Jakkaru is a contract Dorian must complete alone. Delivered to him via a small red envelope, the name inside propels the stakes of this dangerous game higher than ever before. Dorian will sacrifice anything for his son, but it’s not until he is ordered to do the unthinkable that he grasps the horrific depth of his commitment.

2. How do you come up with the idea of the book?
Incidentally, the original idea for the Envelope: Red was not mine. It was actually my fiance who came up with the story-line and fleshed it out as a mini-short story. I thought the concept was so intriguing that I wanted to explore turning that skeleton of a plot into a full-length novel. So while the finished work is all mine (subplot, characterization, story arc, climax, etc), the seed was planted by someone else. I want to add here that I asked permission to use the story idea as the basis for my next novel before claiming it as my own.

3. What is your inspiration?
My inspiration comes from the most unexpected places! Sometimes the seed of an idea may be planted by someone else, other times I might get a nugget of inspiration out of seemingly nowhere as I am going about my everyday mundane tasks. You never know when or where inspiration is going to strike, but I always embrace it when it does. I have a little notebook used expressly for that purpose, and in it I keep track of all my various topics and ideas for potential future projects.

4. Can you see yourself in any of your characters?
I break myself into pieces and infuse one small part of me into each and every character that I write about. Take the “right” trait from each character, and you could combine them to come very close to knowing exactly what sort of person I am. However, I am not going to tell you which of the traits in each character came from me. Where is the mystery in that?!

5. What do you like most about this book?
One of the main characters, Rafe, completely stole my heart as I was writing Envelope: Red. He is just so genuine and loyal - a real friend who is trustworthy, dependable and honest. That kind of strong, pure disposition is so rare these days and Rafe is definitely a gem. And not only that, he is charming and funny - a great joy to be around.

I also like the fact that this book culminates in a shocking twist. I'm eager to hear from as many readers as possible to learn how many folks were able to see it coming. From feedback I've gotten so far, it seems I have managed to surprise the majority of readers and keep them guessing all the way until the end.

6. What's something you want to try at least once in your life?
Scuba-diving. In fact, I have never even gone snorkeling. I'm convinced this means I am missing out on one of life's great experiences.

7. What are you working on right now?
I am working on my next novel, a sci-fi thriller called Renata, about a young couple who loses their daughter in a tragic accident and are willing to go to any lengths to have her back.

8. Anything you would like to say to your readers?
My books are the best part of me. I put my absolute all into the novels I write and offer to you, and I strive to make sure you receive a high-quality product (with no cliff-hangers). Envelope:Red is my second go-round but my first book still holds a special place in my heart. I call my debut novel, No Greater Illusion, my single greatest achievement and my contribution to the world. And sometimes I laugh when I say that last one, because I don’t want anyone to think that I have delusions of grandeur... but in my heart I know it is true. And so, with a humble spirit, I offer them both up for your enjoyment, or your scorn; but either way the experience is now yours. I also want to sincerely thank you for reading my words. I do this for you.

Jack of all trades, master of none - save for the art of procrastination - K. Baskett lives by the motto, "Never do today what can be put off until tomorrow." K. firmly believes that you aren't really interested in the author's hometown, spouse, children or pets, and has therefore decided to spare you the details. No Greater Illusion is the author's award-winning debut novel. Envelope: Red is the gritty suspense-thriller with a heart-pounding conclusion.